Deceased donor transplants in India during the last decade 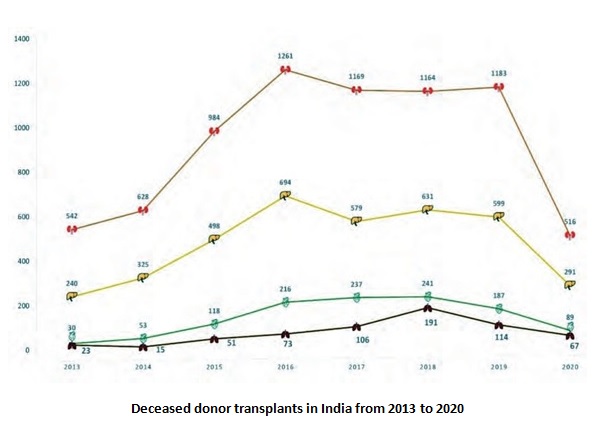 Why has there been such a dip needs urgent attention of health policy makers including the national body such as National Organ and Tissue Transplant Organization (NOTTO). It is time to introspect and put the program back on track. The Times of India conclave on organ donation discussed the issue to some extent but can a national task force be created to look at this worrying trend.

This newsletter issue also carries data on organ donation from India and other countries for comparison.

Since 2018, it has been possible in India to include your wish to be an organ donor on Indian driving license. However, the clause to pledge or not was so far optional. A simple smart move by Rajasthan transport department to make the clause compulsory and request for a change in the application, has meant that one can't proceed further in the learner’s license application process without expressing one's wishes.

In this issue we carry an interview with Mr. Mahendra Soni, IAS, Transport Commissioner, Rajasthan on how this move has had a positive impact on the number of people pledging for organ donation in the state.

There are 997 RTOs in the country that issue over 1.15 crore fresh or renewed driving licences every year. A rough calculation shows that on an average, 40 licenses are issued by each RTO on any working day. The impact of this initiative will help improve the organ donation in India in the times to come.